Allianz UK Volunteers Swap the Office for the Garden 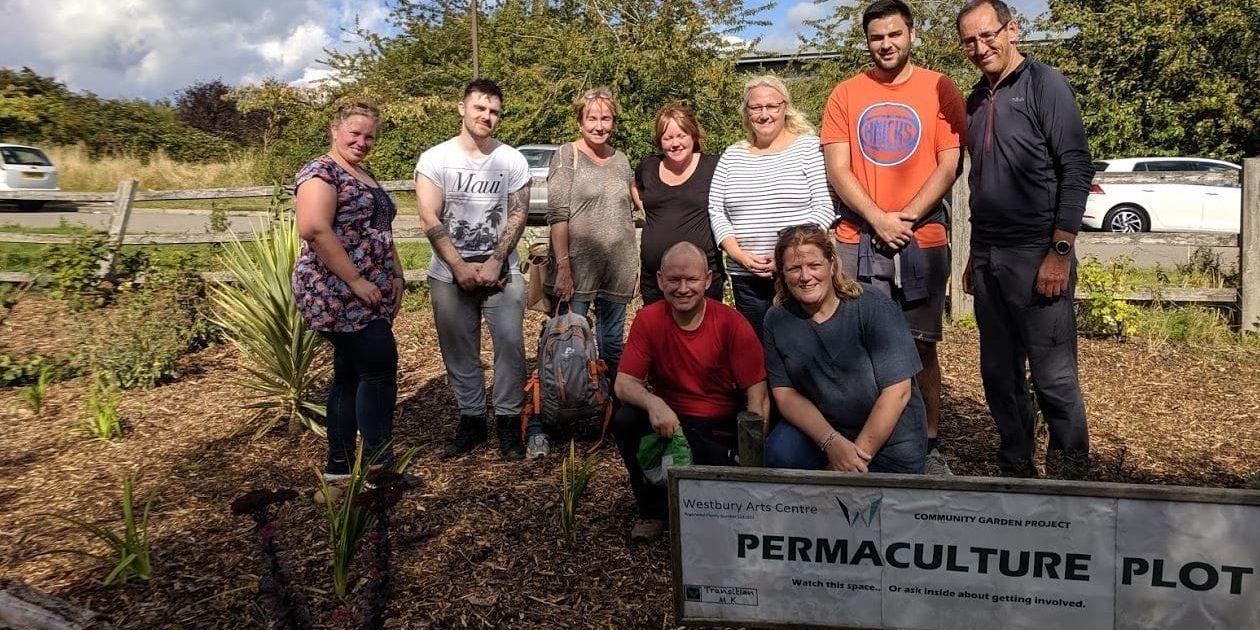 The Planting Up garden at Westbury Arts Centre was the lucky beneficiary of 11 Allianz UK volunteers from the Milton Keynes branch swapping their desks for some fresh air this week.

Although this volunteer day had been organised for some time, it wasn’t until a couple of weeks before that we knew the exact gardening tasks the team would be given because of how much is always changing in the garden.

Our recent permablitzes had seen us tackle bindweed in the Forest Garden and assemble the greenhouse frame, so we asked the Allianz UK team to help us in those areas by doing the jobs to follow on from where we’d left off.

It didn’t take long for the team to get stuck in so we could quickly see the difference.

Between them, the team were pulling up the bindweed, removing the weeds to the compost drying-out pile and covering the newly freed-up area with woodchip.

This helps us to replenish our mulch and should keep the weeds at bay for a while too.

Everyone mucked in and played their part. This is admirable in itself but even more so when you consider that this was how the team were spending Danielle’s last day “in the office” before she goes off for maternity leave!

You certainly can’t fault how thorough they did the job either. There’s not a weed in site in this picture from the top end of the Forest Garden bed!

The rest of the team joined the Forest Garden weeding team after lunch.

Just compare this “after” picture to the “before” shot. It really encapsulates how Allianz UK’s volunteers managed to transform the area into a weed-free plot.

Meanwhile, at the other end of the garden near the wildflower patch, beehives and insect hotel…

This group started by moving the greenhouse to the side then got to trimming the hedge and pulling up the weeds to clear the necessary space.

Their next job was to flatten the land they’d cleared ready to put the weed membrane down where the concrete paving slabs (kindly donated by Peter Tarbox) were going to go.

And finally came the heavy-lifting part as the team had to shift the concrete slabs into place for the greenhouse to sit on and to construct a path down the middle. Then the very last task was to move the greenhouse back, to rest on its new base.

Just like their counterparts in the Forest Garden, this crew was just as diligent, which is clear from the amazing results!

You did a fantastic job and helped us achieve so much.  You’re welcome to come back and share in the literal fruits of your labour any time 🙂

A tranformational experiment over lockdown
June 17, 2020