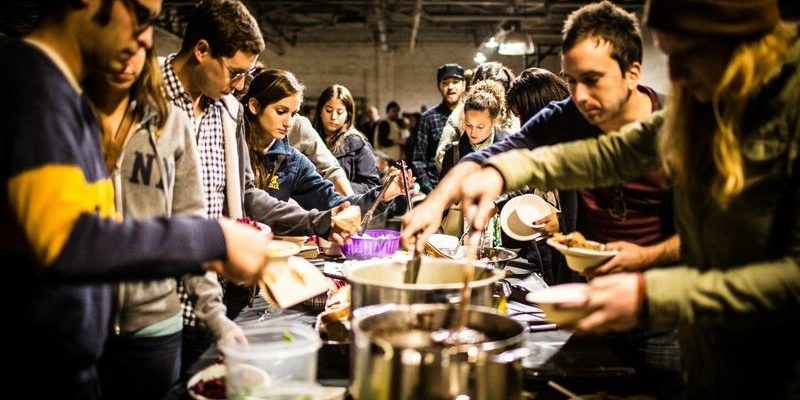 According to the MK Food Revolution, MK Soup is:

Based on the Detroit Soup model, MK Soup is a meeting place for people who would like to make the world a better place- whether through food, community action, sustainability or another idea. MK Soup is organised by the MK Food Revolution and the MK Christian Foundation. On the night of MK Soup you buy a £5 ticket for a bowl of soup and in return, you get to listen to four people pitch their community ideas. At the end of the night, the crowd votes for its favourite idea and the winner takes the profit of the night. Two months later, the group then hears back about what has been achieved with the money.

We decided to take part to pitch for money towards a new shed for our plot.

Along with some hand-drawn visuals and a lot of improv on the night, we conveyed what we were trying to achieve with our project overall as well as give an idea of what Westbury Arts Cente looks like and has to offer the local community (that we’re adding to).

This is the outline of our MK Soup pitch. (Click on the image opposite to open the slide-deck.)

Even though we didn’t win, we were delighted to see the interest we’d generated.  We learned something from the audience Q&As at the end of our pitch and also made some worthwhile contacts – not least from the new volunteers we added to our group but also from the local connections we made with a potential carpenter to help us build a shed as well as the school volunteer group that won the evening’s event.

A tranformational experiment over lockdown
June 17, 2020

Allianz UK Volunteers Swap the Office for the Garden
September 12, 2019