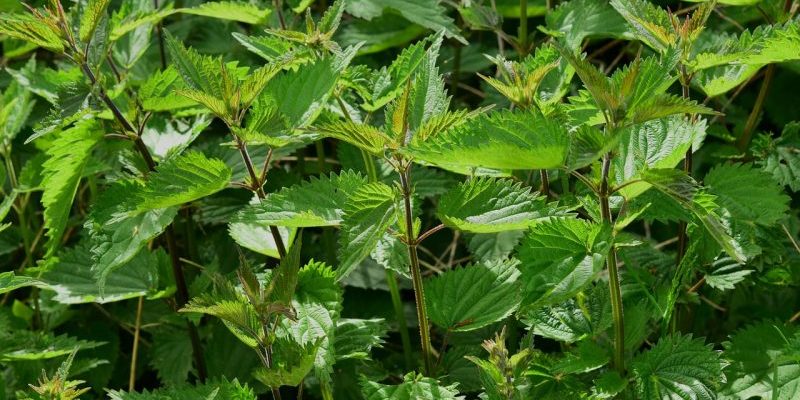 One thing our permaculture plot has no problem growing is nettles so it’s only natural that we’d want to investigate how we can make better use of these so-called “weeds”.

It turns out that, like many wild foods, nettles are extraordinarily rich in nourishment – not just for plants but for surrounding wildlife as well as us.

A history of living with stingers

The name is said to have come from the old English for needle, probably due to the tiny hair-like needles that sting your skin (with a formic acid) when you come into contact with them. This evolutionary tactic has helped nettles survive over the years; which is where their name, “stinging nettle” comes from, and ultimately what puts most of us off going near them.

The sting is said to deter animals from feeding on your greens in your garden if planted around the plot, but they’re also a fantastic butterfly attractor, a “dynamic accumulator” that indicates fertile soil and a useful addition to the compost heap to speed up the decomposition process.

The Romans weren’t deterred by their sting. They’re said to have had many uses for nettles, not least for making medicinal health cordials, using them to stimulate hair growth and for giving horses a sleeker coat.

There’s also evidence to suggest that the coarse fibres of nettle stalks were once used for cloth making and that during the Second World War tons were collected to use as a dye for UK army uniforms.

The nettle has been found to contain vitamin A, vitamin C, calcium, magnesium and to be rich in beta carotene and other antioxidants as well as B vitamins, folate and iron.

Having been used to prevent scurvy, as a circulatory stimulant and as an aid to reducing blood sugar, here are just a few of the benefits to consuming nettles:

As a diuretic, nettles are known to help to reduce blood pressure and alleviate prostate problems in men. There’s also some evidence that nettles can help with seasonal allergies and hayfever by acting as a natural antihistamine.

*As with all natural remedies, always check with your doctor so as not to interfere with prescribed medication.

Nettles can be brewed to feed your plants, giving them a natural nitrogen-rich fix. You can either use the foliage as a welcome addition to your compost, or let them rot down in rainwater for 3- 4  weeks to make a nutrient-rich liquid fertiliser that you’ll need to dilute (one part of concentrate to 10 parts of water) to apply this liquid plant food directly.

Alternatively, nettles can be used to make a tasty brew for you too. You can either dry the nettle leaves and flowers then steep them just like any other tea leaves to make a refreshing herbal tea or steep the fresh tips in boiling water. In either case, it’s advisable to remove the nettles when the water goes slightly green to prevent the tea becoming too bitter. And you can always enhance the flavour with a slice of lemon and a little honey.

It’s been said that nettles serve a surprisingly good use as a packing material for storing apples as the high nitrogen content stops mould from forming.

Free, nutritious food for you

Nettles are a great spinach substitute so you can use them in just about any recipe that contains spinach. All you need to do is steam them for five minutes to preserve their nutritional content and prevent them being cooked down too much. You’ll find the sting disappears upon cooking, so how you eat them, juice them, stew them or cook them up is up to you…

Our resident “foodie” Abigail Stephenson has a couple of other nettle recipes to whet your appetite too. Keep an eye out or them, as we’ll be posting them as a follow-up to these at a later date…

How to Save Money by Never Wasting Food Again!
September 16, 2018